Skip to content
Home/My Hobby District, News/City’s latest burger destination, Hangar Kitchen, is even more than that
Previous Next

City’s latest burger destination, Hangar Kitchen, is even more than that 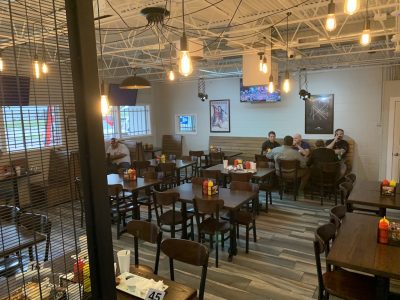 “Everyone” in town seems to be talking about the burgers at Hangar Kitchen, just across from Hobby Airport at 8800 Telephone Rd.

Its motto is “Good Food. Good beer. Period.” But from the rave reviews customers are writing on Yelp and Facebook foodie groups, it’s obvious there’s more to the story than just good American food and good beer. Menu influences from Europe, South America and Asia indicate there’s something from everywhere too.

There’s parrilla chicken, grilled salmon, shrimp po-boys, chicken and waffles and parmesan truffle fries. But the burgers are the headline.

In fact, Alison Cook, the James Beard Award-winning food critic for the Houston Chronicle, highlighted not just one, but two of the Hangar’s burgers during her “Burger Friday” column on April 2:

I had Bulldog Sauce on my chin as I drove down Telephone Road from Hangar Kitchen, plus a grin I couldn’t wipe off my face.

It wasn’t just that I had taken a bite, then two, then three of an exceptional burger made by this six-month old venture alongside Hobby Airport, and that it had splooshed forth a cheerful amalgam of mayo, mustard, ketchup and barbecue sauce that goes into the house sauce.

It was that the Hangar Kitchen proprietor turned out to be the effervescent young Dimitri Papadopoulos….

Dimitri is a shop owner who smiles all the time, knows all of his regulars by name and is focused on creating a restaurant where locals and Hobby passengers on a layover can find a great meal. Raised in Houston, he comes from restaurant stock; his father ran a Greek restaurant here.

“We wanted to bring new local flavors to the area,” Dimitri said. “People were ready for something new, something fresh; and to make sure it’s fresh, we make everything in-house: we grind our own meat, we make our own sauces.”

In fact, the freshly ground beef and homemade sauces did impress the city’s top food critic. She wrote:

The Straight Up Cheeseburger rises from a well-toasted Kraftsmen bun through a lavish slather of pink Bulldog Sauce and a frill of leaf lettuce, through a thick ground beef patty and melt of cheddar, unto a couple of tomato slices, slivers of red onion and paper-thin slices of dill pickle.

Her mind was also blown by another sandwich, the “Henny Over Burger.”

Here the toasted bun is paved with tots moored in a sticky mesh of Hennessy-cognac-spiked barbecue sauce and green onion, followed by a thick ground-beef patty, a drapery of orange cheese, an extravaganza of criss-crossed bacon slices, a fried egg over medium, and more Hennessy sauce. Taste to believe.

In addition to giving Hangar Kitchen straight As across the board, Cook said the real bonus is the selection of local craft brews, in cans or bottles and on tap.

She noted that she also took home an “epic Greek salad that actually made me feel healthy-ish” and several house-made desserts, including the classic New York cheesecake, a delicate blueberry layer cake and a brace of extravagant chocolate chunk cookies.

And now that Hangar Kitchen has taken off, Dimitri’s next project is a coffee shop just north on Telephone Road, near Ortiz Middle School.

“It’ll be a great place for the community to meet up,” Dimitri said, excited about a local coffeehouse that will serve organic and free-trade coffee on a street known decades ago for rough and rowdy honky-tonks.

As for the visit from the restaurant critic, Dimitri realized who she was as he read her name on the ticket at checkout.

“All I did was tell the guys in the back, ‘I hope you did a good job on that order,’” he laughed.