The Reserve at Bellfort is not the first apartment complex that Elizabeth Castro Gray and her husband Jeffrey Gray have rehabbed, but her enthusiasm about the classic 1955 property is singular and irresistible.

“There’s just something very, very solid about it,” Gray said. “It’s a mid-20th century complex adjacent to the historic Glenbrook Valley neighborhood and only 15 minutes from downtown, so you just know it’s got a great story.” 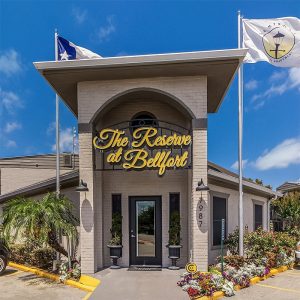 The Grays have been investing in properties for just six years, but they’ve already made their mark. In 2018, their company, Lamppost Capital Management, was awarded Independent Apartment Owner of the Year by the Houston Apartment Association.

Elizabeth said there is tremendous satisfaction in being able to offer hard-working Houston families a clean, affordable and safe place to live and also being part of a sweeping change, like turning around a complex.

“It wasn’t by design, but it seems like we’ve always taken on challenging properties or properties that are in challenging neighborhoods,” Gray said. “It’s important to try to be a force for good.”
It was in that spirit that they toured and ultimately bought the 204-unit property at 7987 Bellfort, formerly known as Las Palmas.

“I’m from Houston and I knew that even though the Hobby area has such a rich history, it had fallen into some disrepair,” Gray said. “That’s changing, with our property and with the area. In a year, we’ve put almost a million dollars of rehab into the property. We’re so proud of it.”

She said the crime rate around her property fell precipitously after the district funded additional police patrols and authorities removed nuisances such as a bus stop where suspicious people regularly congregated.

“We’re starting to see some real turnaround, and we’ve got an incredible location, so the biggest challenge is just getting the word out about the changes that are happening,” she said. “We want to make a difference in this district. I want people to want to live here.”

Gray was raised in a working-class, blue-collar family and grew up to realize a successful profession in sales before beginning to invest in property. Because of her upbringing, her mission now is to give families like hers a great place to live.

She said part of her excitement is having the Hobby Area District as an enthusiastic partner.
“They have done such a great job supporting the businesses while coordinating with all of the agencies in the area, including the mayor’s office, Metro, TxDot and the police,” she said. “By working together, by continuing to work with the District, I’m sure can accomplish even more.”

“It’s great to have an energetic partner at the Reserve at Bellfort,” Strope said. “They are definitely on a mission to provide working class people with a safe and secure place to live.”

She noted that the partnership includes a program in which the District funds background checks on prospective tenants for apartment complexes, a service that the Reserve at Belfort has used to ensure its community is home to responsible residents.

“It’s just one of the supplemental programs that adds value for our area businesses,” Strope said.

The Reserve at Bellfort
https://www.reserveatbellfort.com/